First Person: How Matt’s Loss Made Him Stronger

"One of the most challenging things about OCD is that it loves uncertainty and fear." 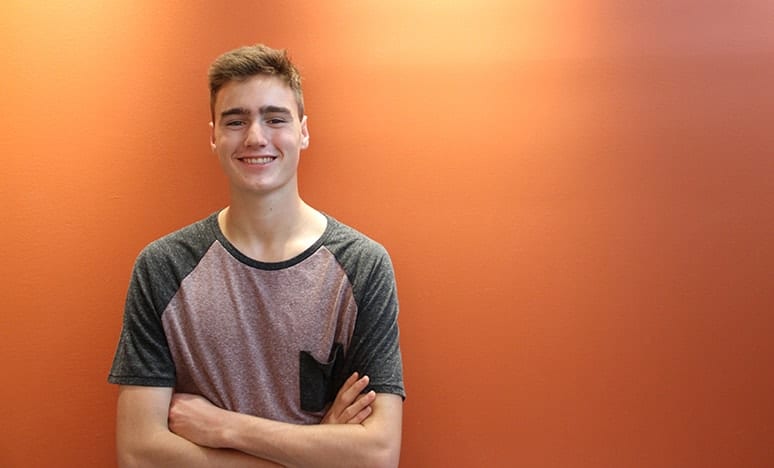 Matt struggled with OCD as a young child, but was able to manage his obsessive fears and compulsions by working with a psychologist. When, as a teen, his best friend Gunnar’s father took his own life and killed Gunnar, the OCD recurred as a crippling illness. “The thoughts got so deep and dark that I just really didn’t want to be here,” he says. It was when he, his parents and his therapist agreed that his OCD and trauma stress required a more in-depth intervention that things started to get better. “At that point I was just so stuck and frozen that I realized that I definitely do need help.”

Tell us about growing up with OCD.

Matt: Since I was about 5 or 6 years old, I’ve had some pretty challenging or severe OCD. It started off with the obsessions and compulsions. Washing hands, touching doorknobs, counting my steps — stuff that wasn’t debilitating at first.

Gary, what did you think about his OCD tendencies when they first appeared?

Gary: The OCD presented fairly quickly as something that was more than just quirky young kid activity. So we got plugged in through his pediatrician to a terrific child psychologist in Vermont. And for many years when Matt was out of balance, we would check back in with her and get active care. For many years he had long runs of very successful self-management, and whenever he got a little out of balance we would spend some time with the psychologist.

What happened two years ago?

Matt: I had a friend named Gunnar who lived about 3 houses down from me, and we were very, very close. Before I was even born my parents and his parents became very close. Gunnar was like a brother; he was like part of our family. I remember waking up at 6 in the morning to the doorbell ringing and it was Gunnar because he wanted to play piano and he didn’t have a piano at his house. That was the relationship we had —free flowing. And his father, Mr. S., was like a dad.

About two years ago now, Gunnar’s parents went through a pretty rough divorce and his dad actually moved away. Gunnar eventually moved in with his father. It was challenging for me because he was living somewhere else. And then one day after swim practice, my father picked me up and said, “I’m so sorry to say that Mr. S., Gunnar’s dad, took his life, but before taking his life, he killed Gunnar.”

I didn’t cry, I didn’t know how to react. I sat there. And the ride home was silent and we got to my house and I sat in the car for a few hours because I couldn’t move.

‘The thoughts got so deep and dark that I just really didn’t want to be here.’

Gary: We found out about Gunnar and Matt was out at swim practice, so we had maybe an hour to prepare how we were going to present it to him. We were concerned because of his intricate relationship with Gunnar and the family and then how all that affects the OCD. All that strategy went out the window cause as soon as he walked out he had 100 texts on his phone from friends and other people in the community. He asked what happened? I don’t remember what I said. Matt basically said don’t tell me anything else. I don’t want to know. And that’s where he stayed for about 6 months.

How did your OCD respond?

Matt: It got a lot worse. OCD can be very challenging when it mixes with a trauma, I learned, because one of the most challenging things about OCD is that it loves uncertainty and fear and latches onto them to create obsessions and compulsions. I couldn’t think about anything else besides the OCD thoughts that were in my head. When I was younger I was really good at distinguishing the OCD thoughts from my own thoughts. Now, it got to the point where I just couldn’t tell. I couldn’t think straight anymore. I wasn’t doing my schoolwork and I was sleeping 2 hours a night for 7 months. It became debilitating. It affected my running, my schoolwork, my social life, and that is when I knew that I was very, very broken.

What were some of the things that were happening in your mind?

There was fear of everything that reminded me of Gunnar. The car that Mr. S. drove; the places that Gunnar and I used to go; people who had the same hair color as him, who had curly hair but didn’t even look like him. People who wore a certain color. The obsessions in my head were kind of like, “You can’t go near this kind of car cause you will die if you go near this car like Gunnar died.” The obsessions were tied to my safety. My dad was around the same age as Mr. S. so my OCD would say, “Your dad is around the same age as Mr. S. and that means that he is like Mr. S so he’s going to hurt you.”

Was there a certain time that really scared you?

I would just sit there at night just terrified, frigid, watching my door, my window, and my closet all at the same time. I came to the point where I realized that I needed help. The thoughts got so deep and dark that I didn’t want to live, and those were scary thoughts, especially to deal with alone because at this point I wasn’t talking to anyone. There were a lot of obsessions around suicide and thinking about that and thinking that if I am just not here then I don’t have to deal with these thoughts. It just seemed very easy and a quick solution.

How did you decide it was time to get Matt some help?

Gary: He spent a couple of months working with the child psychologist in Vermont. After maybe a month we knew that this was more complicated and beyond what she could handle in an hour or two a week. My wife and I felt pretty strongly that Matt needed more. So did the psychologist we were working with.

Matt: Of course I was very resistant because I did not want to think of my problems as complex or deep or affecting me in an awful way and also I didn’t want to deal with them. I had stuff to do. I had running to do. I had schoolwork to do. I had colleges to look at.

But my dad had been to a conference the year before where Dr. Bubrick had spoken. My dad said, “What about Jerry Bubrick?” After researching the Child Mind Institute my dad suggested we call Dr. Bubrick. Of course, I was very resistant again. I didn’t want to be taken out of school, especially in June when school was almost over and I didn’t want to have to explain to my friends or anyone. But the conversation seemed to be almost casual between my dad and Dr. B, as if he had seen something like this quite a few times, and then they recommended Dr. Howard too for my trauma.

What were you thinking when you came here for the first time?

I had never talked about feelings and loss like this before so I was terrified. But it was welcoming. I saw Dr. H first, and the first thing she said to me was tell me about Gunnar. And I just broke down and started crying and that was the first time I had cried in 6 months. And it felt really good and I cried for maybe about 10 minutes. I said I don’t know what to do cause I feel so stuck in this sadness. And she said, “Well, that’s awesome because we’re here to get you unstuck. I’m going to have a lot of fun doing that and you’re going to work really hard and this is very possible.” And that was awesome for me.

‘OCD is silly and it’s not you. It’s thoughts you can beat. They are not going to control you.’

How was it with Dr. Bubrick?

Dr. B is fantastic. And it was kind of cool to have two different psychologists working on two different aspects of what I was going through. So I went from Dr. H talking about the trauma and Gunnar’s death and then I went into Dr. B’s and he said, “This is going to be fun for me and very challenging for you because you and I are going to do exposures together and we are going to beat this OCD down to the ground.” He has a ton of fun with his job. He loves doing exposures with kids and he put my OCD in perspective. I was scared of my thoughts and actions. He said you have to realize that everything your OCD is saying is silly and it’s not you, it’s thoughts you can beat. They are not going to control you.

Were you afraid of the stigma attached to this?

Yes, I was terrified, especially because I had just started dating someone and I had just joined cross country, which meant I had new friends and they didn’t know a lot about my past. My OCD was affecting my conversations with my girlfriend, friends or coaches, people I could communicate with normally. Especially in high school or middle school, it’s challenging to talk about mental health. It’s less challenging when someone comes off the field in a soccer game and they have a broken leg. “Are you going to PT?” Things like that. Whereas if I come off a cross country race and I’m crying because I saw someone who looked like Mr. S, people are wondering what happened.

How are you now?

I’m starting to realize that that feeling of occasional sadness or missing Gunnar is not going to go away. But it’s almost nice to have those memories pop up because it reminds me of all the amazing things I had before with him. I am progressing really well and I’m starting to realize that as an adult this is going to be something I’ll hold with me but it’s not something that needs to define me. It’s almost a good part of me because I overcame it. I’m going to continue to live and be happy.

Gary, are you proud of him?

Gary: Unbelievably. Absolutely. I can’t imagine being a teenager dealing with all the nonsense that comes along with that, and then having the noise he has in his head combined with the tremendous trauma he experienced. To be able to navigate life like he does, it’s amazing. He got a crash course at a younger age and mastered it better than most people do in a hundred years.

He’s interested in neuroscience and psychology. Potentially child psychology and neuroscience, and a lot of it has to do with his experiences. To be able to say that he has come around to the point where he can maybe make a difference in someone else’s life based on his own experiences? That’s pretty powerful.